The year before the presidential election year is well-known for its bullishness. This can be seen in charts of data going back a hundred years or more (as the people at SeasonalCharts can show you.) My SeaPro5 study can show the average trend of a four year cycle going back 20 years (5 election seasons) on a weekly chart, projected from an anchor date. So once a month I like to post an update of where we stand wrt this larger time frame: 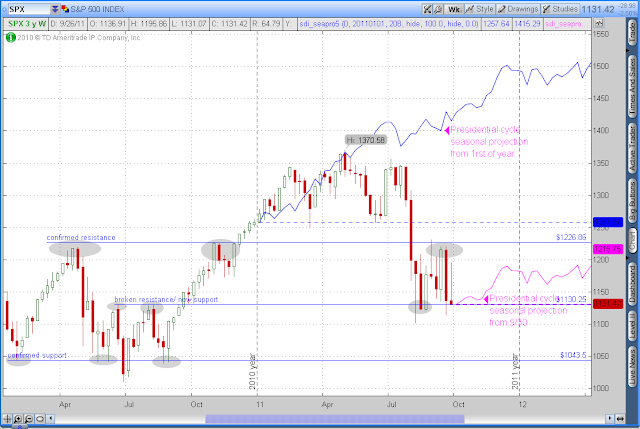 ﻿
﻿﻿﻿ ﻿ The market has diverged significantly from the seasonal projection anchored on the first of the year. My smallDog interpretation of the technicals is that I expect the market to bounce around between confirmed support and resistance areas for a while until one of those levels is broken for more than a week. A "while" could mean for a year or so, maybe through the Nov 2012 elections. While some people might see a Head & Shoulders pattern setting up, I urge extreme caution with that pattern which has been broken several times in recent years with short interest badly punished.


Posted by AllenEv at 8:04:00 AM
Email ThisBlogThis!Share to TwitterShare to FacebookShare to Pinterest

Three words: Commission Free Trades. http://share.robinhood.com/deane16 Join Robinhood and we'll both get a share of stock like Apple...