i am bullish on this market. i think we are about to see some shock and awe. here's why:

firstly, it is just the season for putting money to work in the markets. people are getting tax refunds and seeing good results as this quarter draws to a close. here's a seasonal projection of SPY: 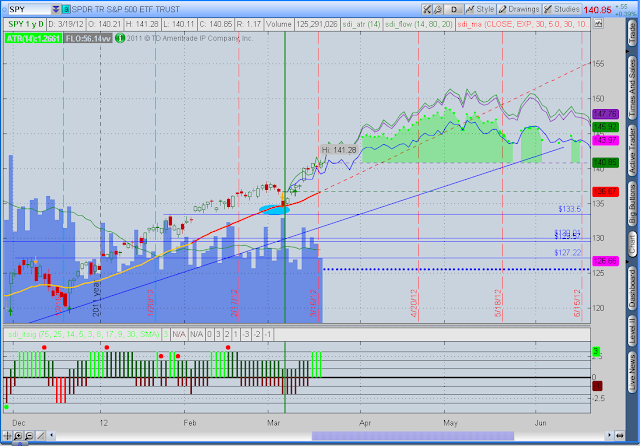 now the other signs that are figuring in my thinking are that utilities got whacked pretty hard last week. here's my favorite utility, ED, sucking wind: 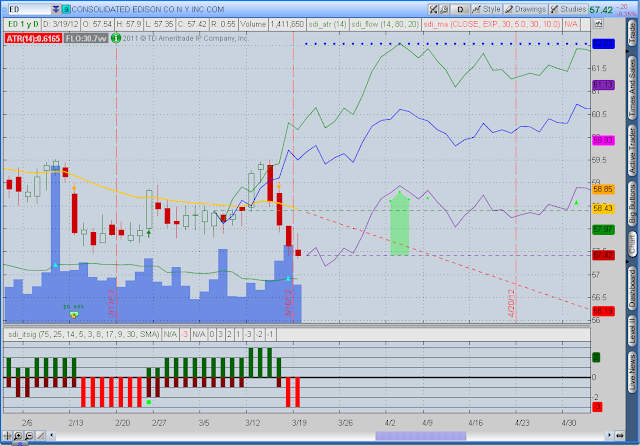 there was a high-volume exodus from ED last week and the same pattern for utilities in general. utilities are where people hide out from the market in bad times because they are relatively stable and pay decent dividends (4.2% yield.)

furthermore, the treasuries took a drubbing last week too: 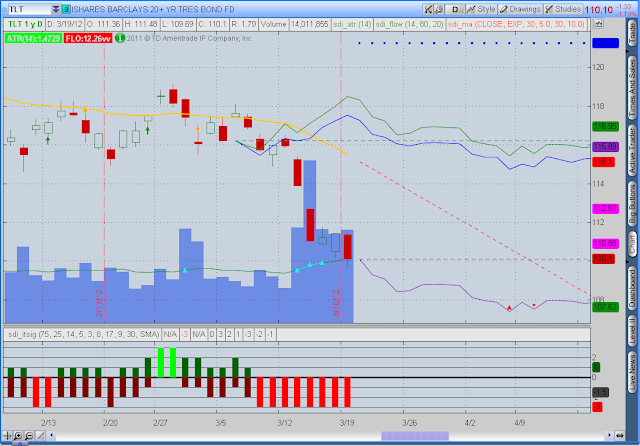 this all says to me that there is an exodus from the safe/defensive investments in these final weeks of the first quarter. i am placing my bet that this is a rotation into risk-assets. so hold onto your hats people.

Posted by AllenEv at 8:41:00 PM No comments:
Email ThisBlogThis!Share to TwitterShare to FacebookShare to Pinterest

at the li swimmers meeting this saturday i initiated a discussion about a strategy that is called broken-wing butterfly. so i just wanted to rehash that here briefly.

here's how the standard butterfly looks on the equity we were referencing, gmcr:

you can see that this is a low risk/high reward kind of trade but with low probability. one should expect to see these go out with a small loss most of the time. at the peak of the sweet spot centered on 60, there is the potential for profit of $228 and the more likely loss limited to only $17.


breaking the wing transforms this trade from low probability to high probability. at the peak of the sweet spot this bwb will produce $268 of profit and the flat area below 57 is a $22 profit. the trade off is that there is now a higher risk to the trade with max loss of $228 occuring for prices above $65.

these bwb's only tend to price for a credit like this when implied volatility has spiked. in this case news was released that starbucks was coming out with a single-serve coffee maker and this caused gmcr to gap down.  that you can trade these bwb's reactively like this is what appeals to me. the strikes were chosen to place the sweet spot at the top of the gap, the theory being that that this is where gmcr is likely to find resistance. furthermore implied volatility is likely to decline as gmcr rises into the sweet spot which helps develop profit in this trade. for this reason, i am not sure it is wise to trade the opposite, a broken-wing put-fly, in reaction to a gap up. it is likely that they would not have the IV spike to be initiated with a credit and the tendancy of IV to increase with declining prices would work against it.

Posted by AllenEv at 8:00:00 AM No comments:
Email ThisBlogThis!Share to TwitterShare to FacebookShare to Pinterest

those of you who signed up to tastytrade via my referral link - i thank you greatly. however, this creates a high-class problem for me because tastytrade does not share your information. if you would kindly email me at support@smalldoginvestor.com i will reply back with the import files i promised.

best.
-allen
Posted by AllenEv at 10:30:00 AM No comments:
Email ThisBlogThis!Share to TwitterShare to FacebookShare to Pinterest

one of the objections people have to selling calls against their stock is that if the stock starts to run-up then they get left spectating. this is unfortunate because equities only trend about 20-30% of the time. if you are not selling calls against your long stock then you are leaving money on the table and are most likely frustrated with the lack of profitability in range-bound trades.

i now have a new strategy, along the lines of my other nearly-naked strategies, that makes it so you can have your covered-call cake and eat it too by participating in up-trends.  the idea is simply this: buy a few more shares than you're selling calls against.

for example: purchase 150 shares of a stock you like and sell one 30-delta call option against it. now if the stock starts to move strongly above the strike of the call you still have 50 naked shares profiting in the run-up. you can let the 100 shares get called away thereby scooping profit off the table and manage the 50 naked shares as a runner, perhaps trailing a stop against it.

i am now doing this with the few equities that i own the shares of. usually these are high-dividend paying life hedges, such as ED, VZ and XOM. now you have no excuses - sell some covered calls. 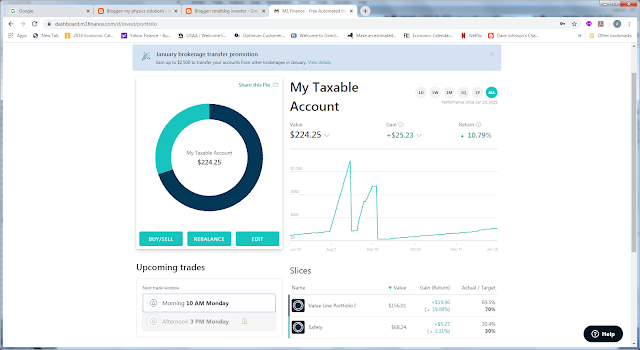