the unique characteristic of options is that they use market forces to assign a value to time. when you buy a stock the price is the same whether one plans to hold forever or a month or 2 minutes. not so with options. all else being the same, an option with 40 dte (days to expiration) is more highly valued than a 10 dte option. this is because the value at expiration, what is called intrinsic value, of a 40 dte option has a greater chance for improvement than a 10 dte option. market forces assure this relationship otherwise one could buy the long-term option and sell the near-term option and realize at least the difference simply by waiting out the near-term (and probably a good deal more!)

the way that time is valued by the options market is not a straight-line relationship. an option with twice as much dte is valued less than twice as much. quite a bit less. the multiple is about 1.4. why 1.4? well, 1.414 is the square root of 2. the well-known relationship is: the time value of an option is proportional to the square-root of remaining time. here's the graph of this relationship: 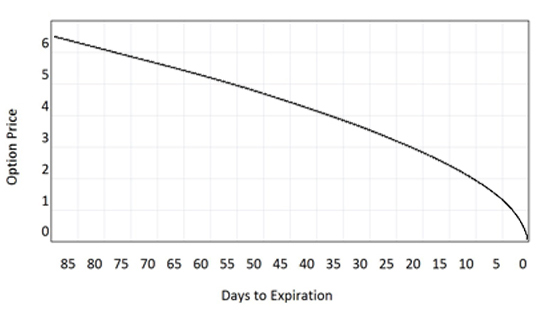 how i think about this relationship is that there is a built-in bulk discount for time in the options market. one can purchase four times as much option dte for only twice the price.

the way that i most commonly use this relationship is deciding when to roll a shorted-option. when there are 10 dte left in an option there are about 40 dte in the next monthly expiration. it is at this time that i begin pricing the roll value. i set up the roll transaction in the thinkorswim platform which will price the mark (mid-bid/ask price) difference between the near-term option i am buying and the far term option i am selling. then i compare this roll credit with the extrinsic value of the near term option (it does not matter if the option is in or out of the money.) if the roll credit is more than twice the extrinsic value of the near term option then i execute the trade.  otherwise it pays to wait for a better price now than later; two or more in the bush are worth the bird in hand! of course, this relationship may obtain earlier or later than 10 dte, depending on how far price has moved away from the strike price and whether or not there are corporate events in the time frame under consideration.

this is not to say that rolling short-options is always a profitable event. sometimes it is not possible to even get enough credit to cover the commissions. if there is a dividend due in the far month the roll may price negatively because the payment to stockholders is priced into options (but this only affects calls.) most often a lousy roll credit is due simply to the fact that markets move and the underlying is no longer trading close enough to the strike. rolling with the grain (rolling-up a short-put to a higher strike or a short-call down to a lower strike) adjusts the short strike closer to the money with a credit and is not a problem. however, if the underlying price has moved against your short option and there is a lousy roll credit then there is a judgement call one has to make - is this particular underlying worth continuing to sell premium on? rolling against the grain will require one to pay money instead of collecting it (albeit less than the strike differential) and closing the option might realize a net loss. the way i think about this is asking: am i following the money to a richer hunting ground? are the credits i collect in future rolls likely to be better? generally it is the case that option premiums are richer when a stock sells off. this is because fear is stronger than greed and people will pay-up to buy puts. my personal rule of thumb is that it pays to roll-down a shorted-put but not to roll-up a shorted-call. rolling down a short-put realizes a smaller loss than simply closing the option because the option being sold in the next expiration has extrinsic value. if you are then assigned you will have a lower cost-basis than you had before the down-roll, although maybe not as low as the strike you rolled to.

a shorted-put gone bad means price has declined but implied volatility has probably increased. thus i pay to roll down the strike of the put to anticipate richer roll credits in the future. it is not, however, necessary to roll all the way down to an otm strike. pick a strike that is at-the-money or in-the-money. this is because, the extrinsic value of an option is dictated by its proximity to the underlying's price - it trails off in both directions- and it will cost less to get down to an itm strike.


Posted by AllenEv at 11:46:00 AM
Email ThisBlogThis!Share to TwitterShare to FacebookShare to Pinterest

Three words: Commission Free Trades. http://share.robinhood.com/deane16 Join Robinhood and we'll both get a share of stock like Apple...